The Capital Region again was state’s second-fastest growing region in 2018.  The eight-county region last year had a population of 1,084,941, up 248 from the previous year. The only region with stronger year-over-year growth was the Mid-Hudson Region at 0.1 percent, according to a Center for Economic Growth analysis of new U.S. Census Bureau data.

Four Capital Region counties experienced population gains, with Saratoga County leading them at 0.5 perceont, or 1,061.  That made Saratoga County the state’s fourth fastest-growing county.  Folliwing it was Schenectady County at 0.3 percent, or 536, and Rensselaer County at 0.1 percent or 181.  Greene County’s population rose by 17.  Albany County experienced the region’s largest population loss at -o.2 percent or 600; and at -0.8 percent, or -492, Columbia County ranked 59th for growth rate among New York’s 62 counties. 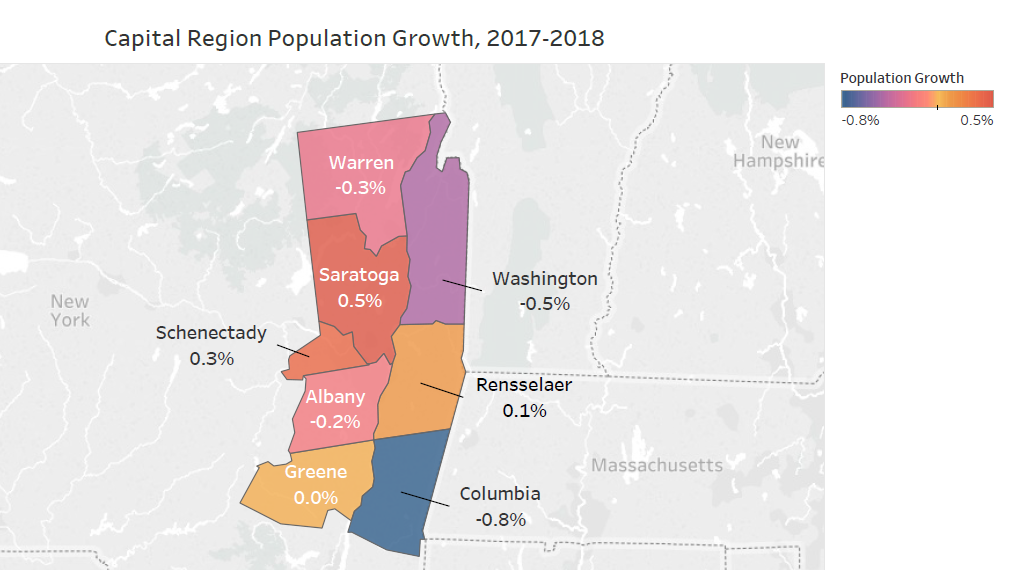 Metro Areas
The Albany-Schenectady-Troy metropolitan statistical area (MSA) saw a 0.1 percent year-over-year population gain to 883,169.  The five-county metro’s population ranking among MSAs nationwide dropped from 63 to 64, with the Knoxville, TN MSA moving up a slot.  The two-county Glens Falls MSA saw its population decline by 0.4 percent to 125,642, and its ranking declined from 312 to 314.  The Hudson micropolitan statistical area’s population ranking dropped from 144th to 146th.