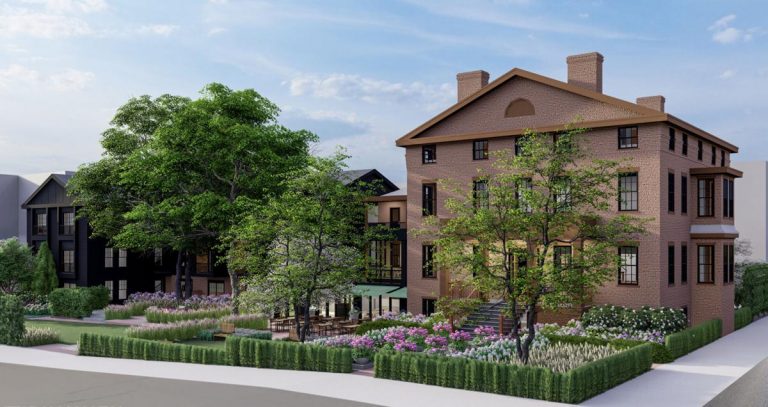 HUDSON — A 10-year tax break for a new hotel at 620 Union St. with an expected opening date in 2022 was approved by the Hudson Industrial Development Agency.

With the agency’s approval, the developer, David Kessler, of Sandstone Partners, has to finalize financing before officially pursuing the Payment in Lieu of Taxes, or PILOT, before the end of 2020, Columbia Economic Development Corporation President and CEO F. Michael Tucker said.

Under the PILOT agreement, Sandstone Partners would save $753,146 in state and regional taxes, Tucker said. The hotel, tentatively called Hudson House, is expected to be completed by the end of the first quarter of 2022, Kessler said.

A financial analysis of the arrangement conducted by Camoin 310, a Saratoga Springs economic development consulting firm, outlines the costs and benefits of the project.

The cost-to-benefit analysis calculates a $597,146 cost of financial assistance for the project construction with $4,395,522 in regional benefits.

“When you’re looking at this, it’s a really strong return for the city,” Tucker said.

Additional analysis predicts sales-tax revenue from employee spending and payroll from future employees would result in $54.68 going to the combined region and state for every $1 of incentive to the project, the analysis predicts, but that prediction relies on assumptions of where the employees’ earnings would be taxed and spent, which is a stretch, Tucker said.

The PILOT agreement provides a construction period of up to three years.

The payment structure would start following completion of construction.

During the construction period of up to three years, the PILOT payments would be frozen at the normal tax level.

The agency will collect a total administrative fee of $143,000 over three installments: The first when the agency closes on the PILOT, the second at the start of construction and the third at completion of construction.

Kessler’s proposed payment structure had the property assessment set at $3,150,000 over the 10 years of the PILOT, which concerned agency members, Tucker said.

The revised, approved terms increase the assessment each year after five years.

The $3,150,000 assessment value was determined by Mark D. Taylor and Anthony R. Concra of Concra Appraisal Associates in Hudson.

In October 2019, Kessler contracted to purchase the property.

The building, constructed in 1835, was a private home and boarding house for Robert and Sally McKinstry, Kessler said. The building sat vacant after an estate dispute following Robert McKinstry’s death in 1870, which lasted until 1895 when it was purchased as a Home for the Aged, he said. The owners built an addition in 1906 and used it until 2014 when they sold the building to an individual who wanted to renovate it into a private vacation home. Some interior demolition was done, but the building has been vacant since 2014, Kessler said.

After living in Hudson part-time to prepare the project, Kessler moved to Hudson full-time in March 2020.

He launched Sandstone Partners in 2018 with a focus on underperforming mixed-use and hospitality properties.

“Our mission is to improve the environment in which we live, work and play,” Kessler said. “We create value for the community-at-large by executing business plans that the community values and embraces.”

Kessler’s interests are in historic preservation, he said, and he was looking to redevelop a vacant historic building. When he came to Hudson, he fell in love with its diversity, history, culture and charm.

“Hudson remains a thriving yet underserved market, particularly by high-quality boutique hospitality offerings,” Kessler said. “With over 200,000 tourists visiting Hudson per year and only approximately 204 rooms in hotels, motels, bed-and-breakfasts and inns, there is a significant undersupply of hospitality units in Hudson. We plan to help fill that void with a locally rooted, professionally managed, independent boutique hotel.” Kessler committed to providing 30 jobs to Hudson, 14 of which will be local.

“It will ensure job opportunities for the citizens of Hudson, at least 14, while they remain in the city of Hudson,” 2nd Ward Alderwoman, Common Council Majority Leader and Hudson IDA Chairwoman Tiffany Garriga said.

“These 14 jobs are dedicated to Hudson residents from vulnerable populations, like people at risk of displacement who are not benefiting from the gentrification of Hudson,” 1st Ward Alderwoman, Common Council Minority Leader and IDA Vice Chairwoman Rebecca Wolff said.

An Industrial Development Agency and Columbia County Economic Development Committee workforce development program will be formulated to assist in the hiring of local workers, Wolff said.

Wolff asked Kessler to designate a specific employee at the hotel as a community liaison in relation to the workforce training and Kessler agreed, Tucker said.

The Hudson IDA is meant to incentivize developments in the city, Wolff said.

The agency was dormant for a long time and there were talks about it being shut down about two years ago, but the Columbia County Economic Development Committee salvaged it, Wolff said.

The property is located in a Federal Opportunity Zone created in 2017 to provide tax incentives designed to spur economic development in economically distressed communities.