New York State Workplace Training is in for an Overhaul 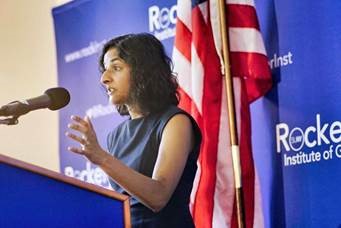 Albany – New York State is awash in programs designed to train people for the 21st century workforce, but it’s far from clear how well they are working and whether they coordinate with one another.

Madhuri Kommareddi wants to change that. Gov. Andrew Cuomo’s recently hired director of workforce development said, that after some two months on the job, she still marvels at the “alphabet soup” of training programs connected with various state agencies. “You need to be an expert on New York state bureaucracy as well,” she said during a presentation Monday on plans to streamline and make training programs more effective when it comes to getting people in jobs.

During her talk at the Rockefeller Institute of Government, Kommareddi noted that an estimated 360,000 jobs in the state will open each year during the next decade. But filling them or keeping them filled will be a challenge in an increasingly bifurcated economy characterized by high-skill and low-skill jobs.

For the high-skill jobs in technology and science or other fields that require a lot of training or education, positions continue to go empty due to the lack of qualified applicants. And low-skill jobs, such as positions in retail or as aides in hospitals and nursing homes, will likely continue to see high turnover due to low pay and poor working conditions. “This is a national problem,” she said.

One of the challenges is to let people in the low end see some growth opportunities. And on the higher end, there needs to be a rethinking of the education, even at the college and university level. Kommareddi recounted hearing recently from a recent computer science graduate in New York City who said she couldn’t find a job because she hadn’t learned the practical or real-life skills needed in that field. Kommareddi didn’t say what college the woman had attended.

To attack this problem Kommarreddi’s office has a new $175 million initiative to examine the various programs and try to better coordinate them. And that includes exploring why a particular program hasn’t worked, as well as lauding those that have. “Let’s be very purposeful to know if it didn’t work out why it didn’t work out,” said Kommareddi, who previously worked at the Clinton Foundation and on Barack Obama presidential campaign.

Making more responsive training programs will entail a “cultural shift,” added Rockefeller Institute President Jim Malatras. Some of the changes, he added, will be akin to turning a “giant oil tanker.”