Brigid Dorsey is the hard-working creative behind les collines, a small-batch producer of jelly and preserves in Hillsdale, New York. Dorsey started the
business in 2013.  She was inspired by the extraordinary crop produced by the crabapple tree outside her kitchen window. That fall, Dorsey picked 50 pounds of
the fruit and began making jelly.  It was only later she realized she had spawned a business.

Today, les collines has over 16 flavors, some seasonal and some available year round. One of the most popular flavors is Meyer Lemon Rosemary, which pairs beautifully
with chèvre, lamb and salmon. (For those who thought jams and jellies were just breakfast foods, it’s time to think again.)

All ingredients are locally sourced excluding the citrus, although Dorsey does grow some fruit indoors herself. She talks to neighbors and visits farms to determine
which has the most flavorful fruit. Over the years, she has developed relationships with several growers in the area.

Shortly after making that first batch of jelly, Dorsey met with the team at Columbia Economic Development Corporation to develop her business plan. She then
applied for and received an SBA Microloan from CEDC to help finance the start-up costs.

“The resources available to small business owners in Columbia County are substantial,” according to Dorsey. “The loan and technical assistance made it
possible to continue to grow les collines. And the ongoing support has been most helpful.”

Dorsey has graduate degrees in Romance Languages. And she is also a 2015 graduate of CEDC’s Microbusiness Seminar Series. The eight-week seminar
provided Dorsey with the information to start ramping up the business.

“Connecting with professionals and other business owners was wonderful,” said Dorsey of the Microbusiness Seminar. “I learned a lot. That being said,
operating a small business is one of the more challenging things I have ever done.”

les collines’ beautiful, homemade products are sold in New York, New Jersey, Massachusetts and Connecticut, in close to 40 retail locations. They can also be found at
Farmers’ Markets throughout the region, including the Great Barrington Farmers’ Market. Most flavors are also available online. 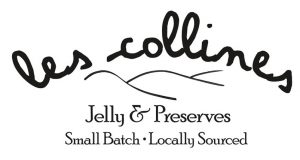